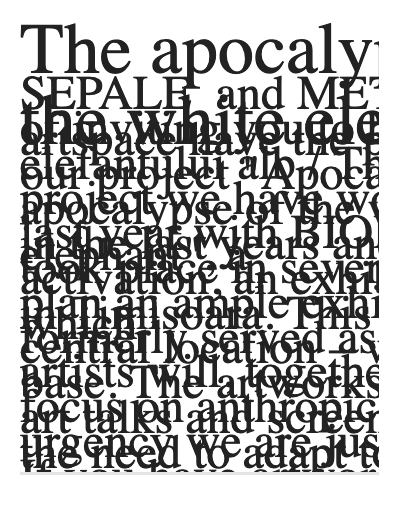 The apocalypse of the white elephant META Spatiu and SEPALE are happy to announce the exhibitional project “Apocalipsa elefantului alb / The apocalypse of the white elephant”, a project we have worked with in the last years and we launched last year with a series of interventions titled BIOHAZARD – activation, an exhibition and which took place in several artspaces in Timișoara. This year we plan an ample exhibition in a central location – which formerly served as military base. The artworks of ca 30 international artists will, together with the art talks and screenings, focus on anthropic themes and the need to adapt to the climate urgency we are just beginning to see as part of our lives.

We witness a stage in our evolution as a species that coincides with the moment defined as the point of no return in climate changes. The impact on our lives cannot be ignored anymore, as the effects of human actions on the environment are already irreversible. If until now the focus has been, more or less critically, on stopping the gamage, now it becomes increasingly clear that the only solution is to transform, on all levels.
This translates as regarding crisis rather as a moment of adaptation, of continuity against all odds, of evolution and transformation.|
META SPAȚIU is a hybrid organinization (gallery and NGO) that aims to promote contemporary Romanian art and artists by produce, organize events that are mainly participative, interdisciplinary and intermedial: exhibitions, conferences, symposia etc. We focus on young artists and we aim to help build a complete image of the contemporary Romanian art as a part of the universal cultural context.

SEPALE – founded in March 2017, SEPALE aims to promote environmentally friendly ideas and people regardless of their field of interest and activity – natural or anthropic. The main objective is to build a bird rescue centre complete with hospital, admittance and release areas, a centre for disabled and injured animals, a centre for the common pigeon (part of the project for the rescue of the Timișoara city pigeons) The centre will also host, as alternative exhibition space, various cultural, art and educational events. All SEPALE projects are grounded in the imperative to respect and preserve the environment.